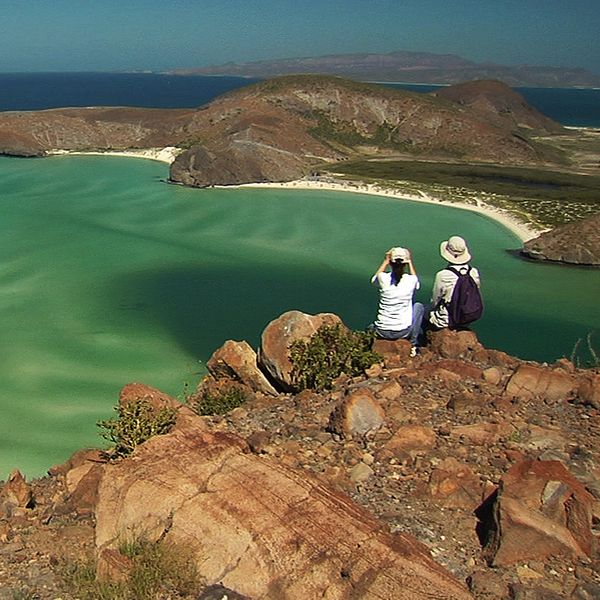 STORY OF THE FILM

The Sea of Cortez has numerous areas of outstanding universal value.

Its protection has been one of the main objectives of the Mexican Foundation for Environmental Education for more than two decades with the clear support of the Manuel Arango Foundation and other national and international organizations.

In addition to several efforts to protect the islands, marine ecosystems and fisheries of the Sea of Cortez, Cristina Iglesias’ artistic project, Estancias Sumergidas (Underwater Dwellings), was envisioned as a symbol of these efforts and a call to future actions.

It was also decided to make the documentary film Jardin en el Mar (Garden in the Sea) with Thomas Riedelsheimer, thereby allowing the power of film making to show how art can help to protect nature.

Manuel Arango is the winner of two Academy Awards for his 1971 documentary Centinelas del Silencio (Sentinels of Silence) about Mexico’s Pre-Hispanic ruins. As work began on Estancias Sumergidas, he decided to once again utilize filmmaking as a means of broadcasting a transcendental message.

In the summer of 2007, an initial meeting was held in Europe between Manuel Arango and German filmmaker Thomas Riedelsheimer. Recognized internationally for his documentaries on artists and their work, among Riedelsheimer´s best-known films is the award-winning documentary Rivers and Tides, on the work of English sculptor Andy Goldsworthy.

In November of the same year, Mr. Riedelsheimer made his first visit to Mexico and Espiritu Santo Island. After touring the island, meeting with the individuals who would participate in the project and becoming familiar with the multiple objectives of Estancias Sumergidas, he agreed to direct a film about its production.

For Mr. Riedelsheimer, films have to provide a sensual experience. Consequently, he is not so much interested in endless bits and pieces of information, but in the challenge of allowing the audience to experience what the protagonists in his movies are undergoing. This might mean diving in the clear waters around Espiritu Santo or walking its dry surface.

Being a cameraman himself he always tries to find images with several layers of meaning dedicated to feeling. This attempt is motivated by his firm believe that people cannot be impressed or changed by mere columns of figures, but only by an experience that touches their hearts - like beauty. Film is not a firsthand experience, but it can get close. Following this spirit he carefully balances the use of words and music, allowing a place for silence and a peace that breathes the rhythm of the place.

At the beginning he focused on Cristina Iglesias as the creator of the sculpture, but soon it became obvious that the film would reflect not only an art work but also ideas on nature, mankind, beauty and protection.

The team realized that the documentary could only do justice to the place and the project by introducing more characters and talking about their relation to the land and the sea. As part of that realization, the film was shot not only on Espiritu Santo island, but the team travelled by land to Laguna de San Ignacio, along the Pacific Coast, crossed the Sierra de San Francisco descending into its deep canyons, and then toured the coast of the Sea of Cortez visiting Santa Rosalia, Bahia de Concepcion, Loreto and Agua Verde, as well as Cabo Pulmo National Park.

Riedelsheimer invited German musician Stephan Micus to compose the music for the film. Micus decided from his early youth on to travel the world and learn old native instruments. He went to Spain to study Guitar, to India for the Sitar, to Japan to learn the famous Shakuhachi flute or Georgia to study the old chorus songs. He lived in all these places to become familiar not only with the instruments but also with the culture.

He developed not only a deep feeling for the culture and music but also for the different landscapes, through which he loves to travel for months.

Stephan composes plays and sings all the music by himself, working in his studio in Mallorca, Spain. He is represented by the famous label ECM.

According to Riedelsheimer, “For me his music has the depth of several layers. I love the individual sounds of old instruments and the time he is allowing each tone to grow. The instruments still seem to be rooted in the land and so is Stephan. It is solemn but not cheerful in a shallow way. The old instruments are individuals like humans and sometimes you think they struggle in playing together and finding a harmonic tune to share. Especially in the last scene, the diving through the sculpture, this represents for me the efforts of us humans finding balance and harmony in our life with and not against nature.”